As a result of cost reduction in bi-direction, dual wavelength transceiver has now made it possible to use Single Fibre technology in an access network with minimal cost increase over equivalent dual fibre equipment.

For operations that require increased capacity – without the capital expenditure headache – the existing single fibre network could be the solution to boost capacity while maintaining resilience and high reliability.

The principle of Single Fibre Working (‘SFW’) technology is that it allows simultaneous communication in both directions at different wavelengths. A simple Wavelength Division Multiplexing (‘WDM’) system as depicted below shows signal wavelengths are widely spaced and are also referred as Broad WDM. 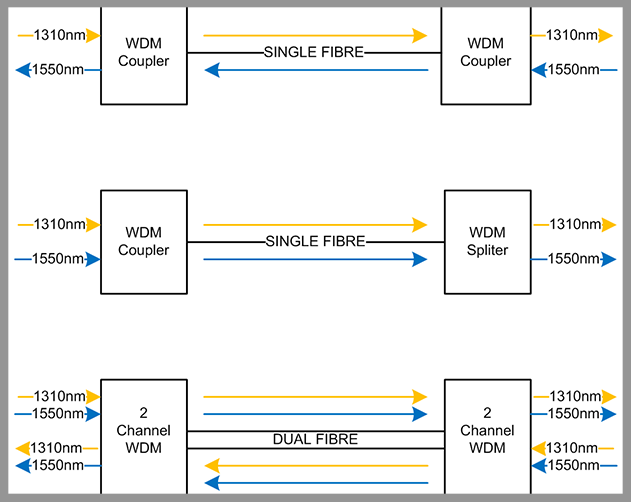 To further increase capacity, Dense Wavelength Division Multiplexing (DWDM) can be employed. DWDM wavelengths are typically only 1.6nm wide) and require much more sophisticated technology to maintain the assigned wavelengths.

Below is a 4-Channel CWDM system operating on a single fibre with data rate from 155Mb/s to 10Gb/s. The transmission distance can be up to 200km.

The following table compares the achievable capacity increase and costs for the different SFW technologies.